What are Patent Claims?

A patent has a lot of sections and text which may look overwhelming at first glance.  Patents also have drawings and figures that may show many different parts of an invention or even show some related inventions.   How do you know what the inventor actually has protection for with their patent?  The answer is found in the patent "claims" section which is usually at the end of a published patent (but if you are looking online using places like patents.google.com you may see the claims section first).    In most cases (but not all) the first claim will be the broadest claim.  So if you wanted to see what exactly the patent is covering, you can read the first claim.   For example, if the figures of a patent you are looking at show a GoPro mount with a head strap, a wall mount, and a hand grip but the claims only cover the head strap example than the inventor may only be protected for the head strap mount.  (disclaimer - please consult with a patent attorney to determine exactly what scope of protection a patent covers as there are many variables to consider)

Patent Claims and Probability of Allowance

Unfortunately, stronger patent claims are often the most difficult and expensive to get allowed by the patent office.  By adding elements or limitations into your claims, you can increase the probability that your patent will be allowed.

In summary, the more claim elements you have in your first claim, the easier it is to get allowed but it may make for a weaker patent.

Patent claims are generally ordered from most broad to least broad with claim #1 covering a very broad or wide reaching overview of the invention.   New limitations and features are added to later claims called "dependent claims".  A dependent claim is a claim that references another claim.   This example may help explain:

CLAIM 2 - References claim 1 so it is understood to have all the features of claim 1 but also includes a new feature.

CLAIM 3 - References claim 2 - has all the features of claim 2 and claim 1 plus adds a new feature.

CLAIM 4 - References claim 1 so has only the features of claim 1 but may add a new feature.

One way to think about the grouping of claims is to picture them as protective perimeter walls around a castle. Your castle is your invention you are trying to protect. 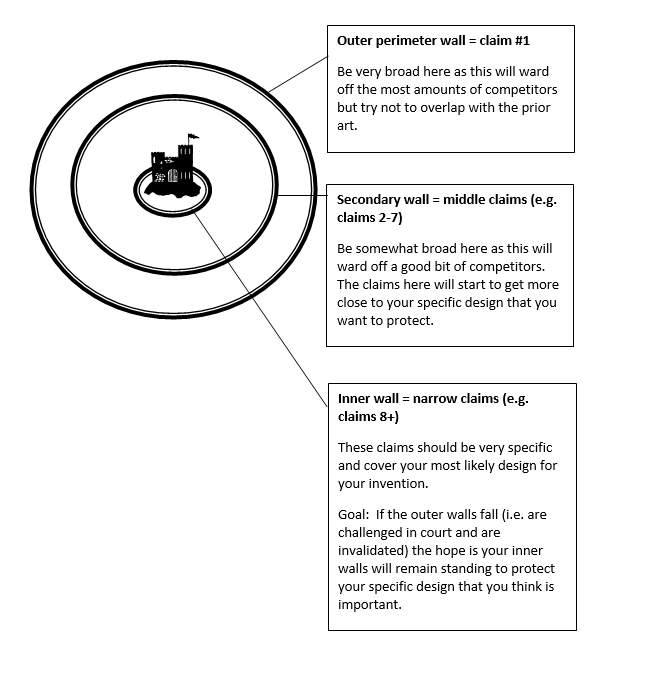 Brad Fach has over 21  years of experience writing and filing patent applications with the US Patent and Trademark Office. He has personally filed over 500 patents in all technical areas ranging from consumer products to software and biotechnology.  Read more....